A few things of note from around the Internet this week:

Nothing to see here 🤷🏼‍♂️

While the ONC confirmed it had sited the Chinese devices within its network, it declined to provide any information about them or say how they might be used. The Chinese institute was equally reticent, and while the Canadian foreign ministry acknowledged the receipt of a request for comment it did not immediately reply. The US state department said it had “nothing to say” on the matter.

Josh Brown (@reformedbroker) delivering a dose of economic wisdom a few days before the midterms.

The constant lying has been a boon to the President, during his campaign and pretty much throughout his entire life. Supporters of his policies see it as a means to an end, so they’re certainly not going to turn on him. He promised to run the country for the benefit of the one third of America that loves what he’s doing and he keeps that promise every day. There’s never been a betrayal or a compromise or an apology for anything, they feel that they are getting exactly what he said he would give them – if not now, then soon enough.

In the meantime, the bloodless verdict of the market is beginning to call bullsh*t on his economic claims. The economic expansion is good, not great, and starting to slow down thanks to the rising cost of money (spurred on by tax cut stimulus) and the cyclical slowdown around the world. It turns out that tariffs are an impediment to everyone’s economy, not just Mexico’s, China’s or the European Union’s.

If you want to feel warm and fuzzy about social media (an increasingly difficult proposition) then don’t follow Jonathan Albright.

I've gotten several questions from journalists today re: "are platforms doing better combatting propaganda & disinformation?" I said maybe. Then I pulled another you-know-who mention network (graph) from Instagram. It's not just bad, it's #offthechain 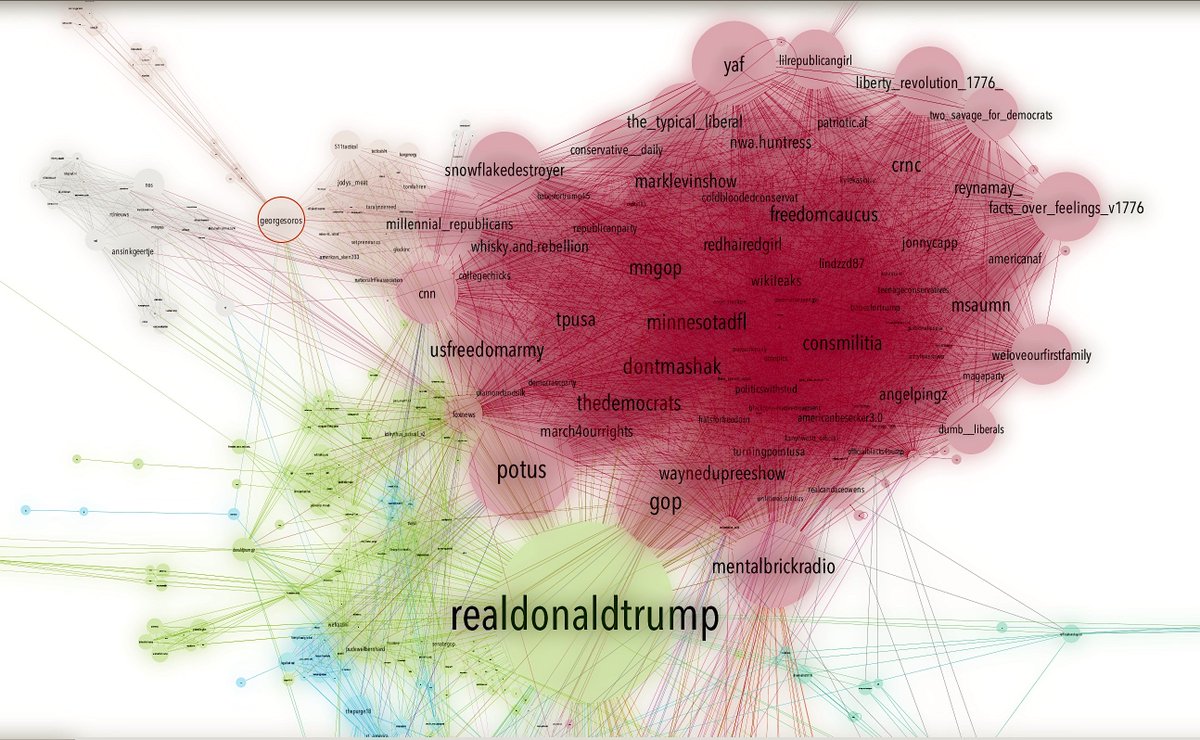 This essay is a little difficult to get through but it’s worth the effort.

For Trump is in love with chaos and seeks union with it. His most bizarre announcements express perhaps the innermost truth: Trump has given himself to absurdity, has so deranged matters that the POTUS has willingly become Nebuchadnezzar, crawling on all fours but, unlike the accursed Babylonian, this status has taken on a form of inverted beatitude whereby god, blinded with rage by the darkness stares for eternity into the whirlwind. A god’s highest expression at its lowest level.

When you pop out the womb in East St. Louis, it’s guns, drugs and danger, from start to finish. And I’m not saying that to brag or nothing. It’s just what it is. It’s the murder capital. And the thing about it is that it’s only 89 blocks.

So no matter who you are, or how much you try to keep your head down … there’s nowhere to hide. You’re in it. There’s no choice. Fact of the matter is, I had a lot of cousins who were street pharmacists. A lot of my people were Streets Disciples. It was what it was. You heard gunshots every night. Routine. You don’t know any different. But that’s the thing ― you might read about those kinds of places, or see them on TV. I don’t think the average person reading this in Montana or whatever understands what it’s like to be a kid in that environment.

You don’t have any dreams. You’re just thinking about survival.

This is rather depressing and, unfortunately, affects us all (some more than others).

As predicted, the results showed that those who scored low on political knowledge were also the ones who overestimated their level of knowledge. But that wasn’t all. When participants were given cues that made them engage in partisan thought, the Dunning-Kruger effect was made even stronger. This occurred with both Republicans and Democrats, but only in those who scored low on political knowledge to begin with.

These findings are fascinating but equally troubling. How do you combat ignorance when the ignorant believe themselves to be knowledgeable? Even worse, how do you fight it when America is becoming increasingly polarized, which certainly increases the salience of partisan identities?

This infrastructure map is incredible.

Get emails from me about interesting things I find on the Internet.